We are proud to announce the release of the latest app in our Texts From series, Texts From Bernie. 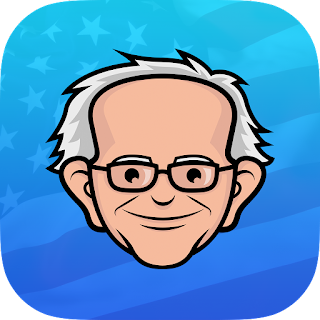 Focusing on quotes from Senator Bernie Sanders from Vermont, it follows in the footsteps of the Texts From Trump app we released a month ago, allowing us to cover a wide spectrum of political discourse in the 2016 US Presidential Election.

Better known as the anti-establishment candidate of the American left, Bernie Sanders has been active in political life as an elected official for many decades and has managed to shake up the political world in this campaign cycle with his staunchly progressive rhetoric.

All quotes are gathered from various public online sources, and are drawn from many speeches and public appearances across his career, including of course his 2016 campaign for the US presidency.

It also joins previous apps in the series mostly focused on historical figures, such as Texts From Founding Fathers, Texts From Oscar Wilde and Texts From Jesus.

Like in other Texts From apps, a new quote gets delivered every day to your device as a notification, via a Today Widget or on a paired Apple Watch. Quotes can be quickly “loved”, “hated” or shared on Facebook and other social networks.

Additionally, all quotes are indexed by iOS 9 for quick and easy search.

In addition, we also released updated versions of all the other Texts From apps. These bring various bug fixes, and improvements to the Glance for Apple Watch.

The app is now out on the App Store, and it is free (though ad-supported). Get your copy now!