If you have been using our Trainer HD educational games, the app has been rebranded!

Trainer HD is now Fretuoso. We also have a new logo!

We also have a new version out for you (5.8), which brings some major improvements to the old Trainer HD app. Just in time for Christmas! 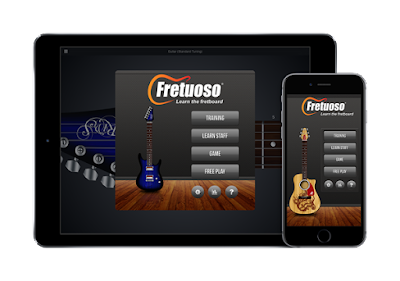 All previous users of Trainer HD will be upgraded for free to Fretuoso on supported devices. Besides the free version, we will also still release and update the separate instrument editions, as well as the Complete Edition.
As we approach 2016, we have some very exciting features in development for the next major version of the app, Fretuoso 6.0.
To keep up with updates on Fretuoso, feel free to follow the new @Fretuoso social accounts on Twitter and Instagram. We also still have an official Facebook page.
You may also get in touch with us directly by e-mail at support@fretuoso.com.
« Texts From apps 6.0, now for Apple Watch 2016 is Here! Guitar Trainer now 100% free »